RDLN held its National Network Assembly at Blue Bay on the Flathead Reservation from September 4-9, 2002. The gathering, whose theme was "It's Time for Renewal," had been postponed from September 2001 because of the tragic events of September 11. 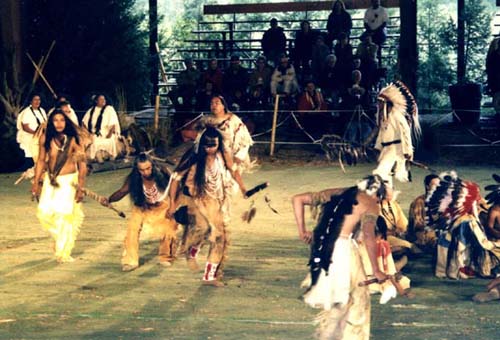 There are seven RDLN participants doing community development work on the Flathead Reservation, including RDLN graduate Nancy Warneke, who was awarded her master's degree from Antioch University during the Assembly and who took primary responsibility for hosting the group. Gina Paget, Ph.D., Director of the Graduate Program at Antioch University, presented the degree during a ceremony featuring Red Eagle drummers, RDLN board members, and graduates of the program. Grizelle Apodaca of Eslabón Associates was graduation speaker.

The group paid its respects to the tribal council and visited programs and businesses on the reservation, including Salish and Kootanai College, where they were welcomed by President Joe McDonald; Ktunaxa Community Development Corporation, where Nancy Warneke is interim Executive Director. RDLN Leader Clarissa Nichols is Office Manager, and RDLN Leaders Monica Caye and Geri Hewankorn are board members. The group visited Self-Help houses recently built by RDLN members and others. These participants are working on a new "Town Center" for the town of Elmo.

RDLN participant and Institute Instructor Jack Guillebeaux, author of "More is Caught Than Taught", led a workshop on Internalized oppression.

RDLN Leaders Nancy Warneke, Mily Trevino-Sauceda, Shirley McClain, and Jack Guillebeaux reported on their participation in the World Conference Against Racism in South Africa last summer. (Board member Twila Martin-Kekahbah, also a member of the delegation, arrived too late to participate.)

The group remembered three Network members who have passed on: Cleo Askew, RDLN Leader, who was housing specialist with the Federation of Southern Cooperatives; Florence Mells, a member of the RDLN Delegation to the NGO Forum on Women in 1995 and was a member of the Southwest Georgia Farmer's Co-op; and Dr. Antonia Pantoja, a leader in the Puerto Rican community, who served as Field and Study Advisor for Hector Correa at Producir in Puerto Rico and whose "Memoir of a Visionary" has recently been published.

At a session on fundraising, Judy Rose, Director of Domestic Grants for Episcopal Relief and Development; RDLN Board member Twila Martin-Kekahbah, Community Liaison at the Northwest Area Foundation; and RDLN Leader Edith Richardson, community representative on the board of the Haymarket People's Fund, spoke of the agencies where they work. At a separate session, Jim Richardson, Director of the National Rural Funders Collaborative, introduced the work of NRFC.

The heart of the Assembly was the Circle of Sharing through which Network members introduced themselves, reflected on the Assembly theme of Renewal, and learned about each other's work, with special leadership by RDLN Leader Evelyn Conley and Board member Art Estrada.

RDLN Board Chair Moises Loza and Graduate James Banks led a meeting on future planning for RDLN. Board member Art Estrada kicked off a scholarship drive with a contribution of $1,000, later matched by equal pledges from Board Member John Zippert and NRF graduate Jorge Botello, and cash contributions from Edith Richardson, Meredith (Coleman) McGee, Lillie Webb, and Shirley McClain. Billie Jean Young offered to contribute the proceeds of two performances of her one-woman show on the life of the late civil rights leader Fannie Lou Hamer entitled "Fannie Lou Hamer: This Little Light . . ."

Staying in tipis during the Assembly was especially meaningful for some participants, who experienced talking circles and music around the fire.